Nuke The Soup – Yin And Yang 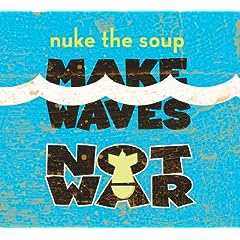 “We moved all summer like separate spirits dancing in the sand, and we moved into another gear never knowing when we’d land.” The story moves along at a steady pace. The poetic trick is to take a word, define it in terms of the relationship the narrator is pursuing, and playing it with a medium dance beat. Very cool. The individual words could become a game – like those email games – define your relationship in terms of temptation, frustration, elation, flirtation, trepidation, and inspiration. The narrator seems confused about the reality of the relationship – on the one hand he’s saying “we fit like yin and yang”, then a line later he’s saying “but I don’t know what you want.” In other words, it sounds real – no easy answers here. Gotta work on it, no matter how good the fit.

I’m shouting out Big Green Jungle for the same reason – no easy answers. We all have to make the decision – chase the mighty dollar, or live from day to day. The narrator here is encouraged to go for the jungle, but he is quite realistic in reciting the fact that “in the big green jungle there’ll always be disparity.” It’s a daily war. The intrigue here is – either choice is a war. Survive from day to day, paycheck to paycheck – daily struggle. Go for the con game of American finance, and it’s still a daily struggle. You can’t let up because the moment you do another will be considered more fit, and in this war only the fittest survive. Sure, while you’re on top you have the nest egg and finances are not your worry; but it’s a constant stress to stay in the game. Nuke The Soup says – no easy answers, but life has some interesting questions =:-) Nuke The Soup
Posted by Cholla Needles at 8:05 PM