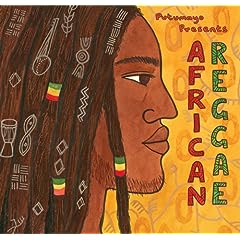 Nothing is better in life than to wake up on a Monday morning to a music that is uplifting and loud. There’s no way the work day will seem a burden when a life-enhancing music fills the air. Putumayo supplies this need with this album. And, to be honest, it wouldn’t hurt my brain to listen to this set every day. As Zoro says in Jubliani, “Jah Children, have a little bit of life I say. Don’t let your problems get you down.” Could sound callous in the face of oppression, were it not for the musicians bringing their total being to deliver the message.

The influence of Desmond Dekker, and even more Bob Marley is very evident on this entire set, but each artist implants enough of themselves that this becomes a vital addition to the Putumayo family. Putumayo’s ability to bring the best music of different cultures to the United States and distribute it far and wide is very important, and each CD also supports a different non-profit group within the culture of origin of each release. That would mean nothing if the music weren’t great. Fear not, the editors have impeccable taste. Putumayo

Putumayo On Eartaste
Posted by Cholla Needles at 9:54 PM