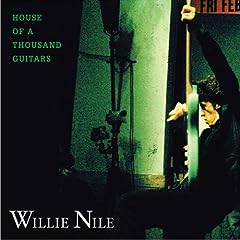 From the very first note I knew I was in for a rousing good time as Willie slowly brings the band into a full-blown anthem “‘neath a delta moon”. This dream is extremely beautiful. “They say there are no broken strings in the house of a thousand guitars.” It’s the house I want to spend eternity in. I really love the way Willie sneaks in lines that take you to other places. A small example is where he shouts out George Harrison, but not by name: “you can play with blood on your fingertips in the house of a thousand guitars.” The party continues with the same energy Willie let out 30 years ago with Run (“I don’t even know if I’m dead or alive”). Doomsday Dance starts off in a blues vein, but quickly brings the dance floor to apocalyptic life (“you dance with Mr Death, he’s gonna cut right in”).

Now That The War is Over slows us down to think a little bit about what live has done for all the people who have been forced to be involved in things they weren’t prepared for. I believe, in fact, that there’s no way to ever prepare for reality. Willie doesn’t play cutesy with the lyrics, he just tells it like it is, and shares the stories of people we all are or know. This gets my vote for song of the decade.

Give Me Tomorrow reviews the past images that Willie has experienced. It helps that they are images we have all seen. He inflects this dance with hope, asking prayerfully, “Give me tomorrow, right now!”. This prayer is followed by Magdalena, a rock and roll love song with lots of great guitar playing: “We danced on the roof, we ate on the floor, and when it was over I begged her for more!”
Willie Nile


An Oldie but Goodie:

There'll be a body count
we're gonna watch it rise.
The folks at CNN
they won't believe their eyes.
We'll do the dead man's twist
this is our last chance
down at the Doomsday Dance