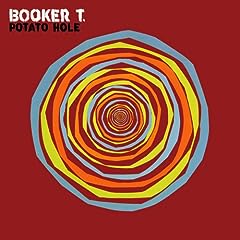 A long-time dream of mine is to find rock players who have a small enough ego to release instrumental rock albums with other players the way jazz players do. Perhaps because jazz has always been about the music, with small audiences, that limits the rock players who have the tendency to think “big arenas”. It does happen occasionally (Santana comes to mind), but not often enough. Booker T has played as a session for many great artists, as well as fronting his own band, so he has the mentality I’m talking about. My dream has come true here. We have Booker T Jones with the Drive-By Truckers and Neil Young playing to their hearts and my hearts delight. No vocals necessary.

This CD has everything one would want from a great rock album. Pound It Out does exactly that – opening the album loud & proud. She Breaks brings in the funky side of rock with a dancing bass line. Hey Ya is a straight-ahead guitar/drum dance with the organ taking on OutKast’s melody. Native New Yorker returns to the loud riffing rock that gets us up and moving with a steady stream of aural candy. Nan is a slow down and look at the world through the eyes of love tune, beautiful and dreamy. Warped Sister is the sole filler. Get Behind The Mule is an instant favorite, perhaps because we’re all familiar with the Tom Waits tune. It’s this tune that makes me wish for more rock players tackling instrumentals. I get a lot of instrumental albums here playing rock tunes, but they usually recreate rock as easy listening elevator music. This group plays it for real, for those of us raised on rock and roll. Reunion Time is simply wonderful, instantly reminding me of 1967 era rock with tons of soul. I hear everything from Jimi starting off the tune to Otis sitting on the dock of the bay, with a touch of little green apples thrown in for good measure. The title tune, Potato Hole is blues funk with the distinct purpose of filling the dance floor and sweating Woodstock 69 style. Space City ends the CD with a promise of more to come, either in this life or the next because Booker T reaches the heavens with his organ on this exquisite tune from the Trucker’s 7th album. 12 stars out of 10 for a Sunday afternoon bbq/dance. I’m hoping this is the first of many rock-based instrumental cds by true rock musicians. Booker T Jones

Posted by Cholla Needles at 1:56 PM