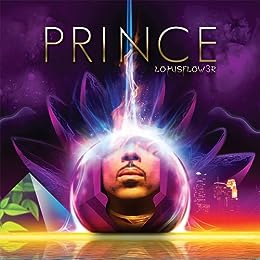 What a show! You will seldom hear me complain that a song isn’t long enough, but the guitar work on some of these cuts is just so dang tasty I hate to hear them end. But end they do, and a few songs later another great guitar lick comes up. Dreamer, followed by Back to The Lotus, perhaps fulfills the thirst most of all, and these two cuts end of the first CD in this 3 CD set. Before going on about the music, I have to say that it’s very cool of Prince to be offering this set to his fans at the low cost of $2 for 3 CD’s. Maybe because of the low cost, the set is only available at Target. No matter, it can be ordered from target’s on-line store.

Okay, to the meat. The album opens with a fun party starter, From The Lotus, an instrumental jazz-tinged ditty with otherworldly effects followed by Santana-like guitar and some funky bass. The leads directly to Boom, a slow rock and roll cut that would fit right into an arena show. This is the song I mentioned earlier that I hoped would continue longer. Seamlessly followed by The Morning After, the first cut that has flavors of Prince’s hits from the 80’s, this jam is just as tasty as any of those. “We can jam, baby, all night long”. The song ends too soon and melds directly into a slow soul-funk beauty called 4Ever. Colonized Mind slows us way down with wailing solos “genetically disposed to rule the world.” We also get a peek into Prince’s spirituality at this point in the party; “without God it’s just the blind leading the blind.” Wonderful, slow build to some great solo efforts. The dance floor is lit up again with the pure funk of Feel Better, Feel Good, Feel Wonderful. Love Like Jazz follows with a bachelor-pad jazzy beat tune, real easy to dance to. 77 Beverly Park is even quirkier, with an almost acoustic trip down a river in Italy or Greece with guitars inviting the sun to settle on the kisses of lovers. Wall of Berlin brings out the funk-rock side of Prince with “reality is only in my mind.” Philosophy while dancing, why not? The party comes roaring back to life with $. And I’ve already discussed the guitar flavorings of Dreamer. All in all, a totally fun album – every song has its own flavor, and we are treated to many flavors here. “It was just a dream – call me a dreamer too.” I have no problem recommending this as a set to purchase for your next party.

And the above only covers the first set. Set 2 goes by the nickname of Mplsound, and starts right off pulling people up to the dance floor with (There'll Never B) Another Like Me. Big ego? Maybe, but who cares? The music is great. 3 high energy dances in a row, then a beautiful, slow, soulful dance U're Gonna C Me. The second hour of the party is just as much fun as the first, with a shoutout going to Better With Time. Aren’t we all? The second set ends with fast popping pure pop of No More Candy 4 U. Half way through he announces “too many haters on the internet”, but don’t worry, it’s still done in fun.

The third set continues the party with the same production values and perfectly performed music and brings on a new vocalist, Bria Valente. “Spiritual humor”. Another good balance of dance floor show-off styles and slow dances. Amazingly, all tasty also. My favorite composition is Immersion, “welcome to the place much faster than time. True reality is the only peace you’ll find.” It’s nearing the end of the party, so these beats give us time to reflect on how great the party has been. We end with Elixer, the title tune of this 3rd CD. It’s a slow ending to the party, performed with harmonic perfection. Prince
Posted by Cholla Needles at 7:56 PM