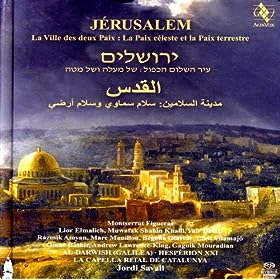 Two and a half hours of bliss. Travel through the history of the musics presented by Jordi Savall. The journey is the length of a good religious service. As I listened today, many thoughts went through my head, as usual; but the one that stood out is exemplified by the irony (at least in English) of the two peaces (two pieces) of Jerusalem. Jordi has focused on the literal meaning of the literal peace of the heavenly Jerusalem and peace of the earthly Jerusalem. That doesn’t stop my wandering mind, and I started wondering what if every religious person around the world sat and listened to this instead of a hate sermon – all on the same week? With millions of minds focused on peace instead of hate, can you just imagine what would happen? Neither can I, but we must dream, and we must dream that our dreams can become reality. I don’t think there’s an individual Jew, Christian, or Muslim who seriously want to destroy the earthly city of Jerusalem. It’s when they go into their separate church buildings, mosques and temples that the religious people begin hating each other. Without doubt they are all looking forward to the ‘heavenly’ city of Jerusalem, so it doesn’t take much imagination to envision them loving each other here on earth. Thanks Jordi! Jordi Savall

Posted by Cholla Needles at 7:06 PM