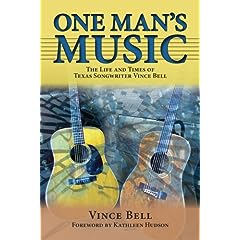 You never know what to expect from a poet in terms of autobiography. Vince surprises in that while his prose is poetic, it reads well, like a good novel. We get small glimpses into his life filtered through the eyes of a good writer. Vince’s life interests me in that the first dozen or so years out of the nest our lives paralleled, though I was in California and he was down south. I cut out of the “scene” after having a few kids and gathering the responsibility to see them eat regular, something a musician’s life doesn’t guarantee. Vince stuck to it, so let’s share some gleanings from the first 40 pages. I will read the rest, but I already know this is a volume I’ll be recommending, and there’s plenty up front to let you know that it’s a worthwhile read.

Vince’s prose is filled with irony and self-deprecating humor, in the best sense. “I’ve grown up in music, worked to distraction in music, married unsuccessfully in music, and I’ve been at it for several wifetimes.” Nope, that’s not a typo, that’s Vince at his best. Occasionally he’ll remind us that he’s a poet, “every kind of human perturbation was partially obscured by a verdant, elephant-eared undergrowth”, but his poetic phrases do not distract from the story, they add some color and flavor.

When Vince speaks of “we”, he is most often talking about himself and his guitar. His guitar meditations make for a peek into a love-affair that we seldom ever get, but is obvious when you see so many guitar-pickers hanging that shapely lover around their neck. “The guitar you played and owned was a symbol of your vision. . .You could rest assured, if you couldn’t be recognized in a carping musical crowd for your tuneful genius, your guitar surely could.” Vince is open and honest about life on the road, and feels no need to shelter himself or his heroes from the diggity eyes of the self-righteous. “Coffee and marijuana: drug maintenance and the first two things you needed to start a rock ‘n’ roll band, even ahead of a new set of strings.” Reminds me of a bass I had that went 6 years without a new set of strings. Loved that filed-down fretboard Fender bass. Dunno what happened to it – gave it to a young musician 20 years ago, who has gone on to become a father himself in the intervening years.

Many of the things you’re forced to do as a musician are pure insanity, like a 3 piece playing in front of 8 people convincing them that they are having the time of their life. I’ve been here: “I got tired of playing in between songs on the jukebox in the same hick towns.” Vince was keen and smart enough to get here: “My first few lessons about the ragtag of showbiz taught me that if you couldn’t fool yourself first, that I an idea didn’t light you up like Times Square, you couldn’t fool anyone else into believing they were in Times Square.” I’ve played with many musicians, and many were legends in their own mind, but a few went beyond that to become legends in the collective mind. They had the magnetism, and charisma, largely because they had total and complete belief in their ability to do nothing else in this word besides play music, no matter who they hurt along the way, or how lonely they were before and after the show.

I’m not sharing any of Vince’s wonderful stories here – you’ll enjoy them as you read the book. Just a few more lines so you can be assured you’ll have fun while turning the pages. I loved this insight Vince had after forming several musical groups: “I was turning into a writer, a different person than the teen idols I had tried to emulate with my group. It would ultimately take a few more dips into the pond of my imagination, a place I never spent much time in the shallow end of. But I was becoming liberated from delusions of my youth. . .If I was going to survive my budding authorship in the rough-and-tumble music world, if I was going to make the difference I aspired to with my work, it would be because I kept playing those solo gigs. Just me and those six strings.” Vince Bell

The book as a stage event:


It was 32 years ago today, Vince Bell taught his guitar to play:

Posted by Cholla Needles at 2:10 PM